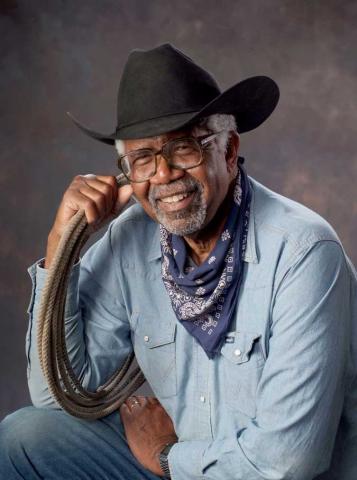 All
Registration for this event is no longer open.

Join Cowboy Mike Searles as he tells the stories of Black Cowboys and Buffalo Soldiers.

The history of the American West is one rich in character and lore.  Following the Emancipation Proclamation and the conclusion of the American Civil War, many former slaves and free African-Americans headed west to a new, wild, and very uncertain future.  The history and stories of African-Americans on the frontier west include those of the Black Cowboy and the Buffalo Soldier.

"Coyboy Mike" Searles is a persona created by Professor Michael Searles, retired Professor of History at Augusta State University.  He is an active member of the Western Writers of America, and has taught African-American History to audiences far and wide.

From C-SPAN, Historian Michael Searles talked about his book, Black Cowboys in the American West: On the Range, on the Stage, Behind the Badge. Using images of black cowboys, Professor Searles discussed their experiences in the 19th and 20th centuries.  You can watch the entire recorded presentation here.

Read more about the African-American Cowboys on the western frontier here.