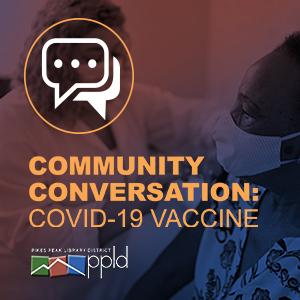 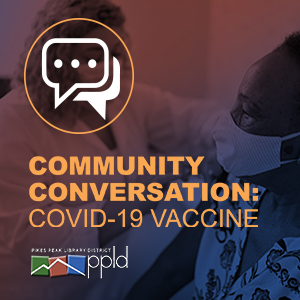 Join us for a panel discussion on the COVID-19 vaccine.

Community Conversations at Pikes Peak Library District is a new series of monthly events that invites the public to discuss current events and issues impacting the Pikes Peak region. We want to promote civil dialogue and greater understanding of different perspectives.

Participants will be emailed a link for the conversation before the program.

Dr. Cynthia Hazel is a Researcher at the OMNI Institute where she leads and supports projects focused on public and behavioral health, with research interest in global health, health equity and digital health technology. Dr. Hazel received her MSc in Public Health Policy from Durham University in the United Kingdom, and her Doctor of Public Health degree from the University of Colorado School of Public Health, where she specialized in Community and Behavioral Health. Originally from Ghana, she has been involved in health promotion efforts targeted at the Black community in Aurora, especially the African immigrant community. Her recent collaboration with her husband Dr. Kweku Hazel is focused on reducing COVID-19 vaccination hesitancy in communities of color.

Dr. Kweku Hazel is a general surgeon and a surgical fellow in minimally invasive surgery at the University of Colorado Hospital. He received his medical degree at Texas Tech School of Medicine in Lubbock, where he also started the Barbershop BP program which is aimed at educating communities of color about high blood pressure and diabetes. Dr. Hazel completed his general surgery residency in 2019 and has been involved with educating community members in Aurora through churches and community organizations since moving to Colorado in 2012. His recent efforts have been focused on promoting vaccination equity and vaccine acceptance, while reducing hesitancy in communities of color.

They are both members of the Colorado Vaccine Equity Taskforce.

Dr. Margaret A. Liu is a world-renowned expert in the fields of vaccines, immunotherapy, gene therapy, and global health. Dr. Liu obtained an M.D. from Harvard Medical School and completed her clinical and research training at Massachusetts General Hospital/Harvard Medical School and MIT. She has pioneered two important new technologies for vaccines and for treating cancer (DNA vaccines and bifunctional antibodies) for which she has received numerous awards internationally and two honorary doctorates including an MD honoris causa, given by the Karolinska Institutet in Stockholm, where she had been previously invited to lecture by the Nobel committee. She is known as “The Mother of DNA Vaccines” and is the scientific lead for the WHO drafting group writing guidelines for mRNA vaccines.

Dr. Liu is CEO of PAX Therapeutics, which is developing gene-based therapy of tendon and ligament repair. As Principal of ProTherImmune, she consults for companies, investment firms, universities, and scientific non-governmental and governmental organizations, is a Foreign Adjunct Professor at the Karolinska Institutet in Stockholm and an Adjunct Full Professor at UCSF, and is the Chairman of the Board and President Emeritus of the International Society for Vaccines. She has held various executive and board positions at pharma and biotech companies (Merck, Chiron, Sangamo, Transgene) and is currently a Director at Ipsen and Adjuvance Technologies. She was the Senior Advisor in Vaccinology at the Bill and Melinda Gates Foundation, Executive Vice-Chair of the International Vaccine Institute (IVI), an independent international organization established by the UN with signatory countries, in Seoul, Korea, and a member of the NIAID Advisory Council (the NIH Division directed by Tony Fauci).